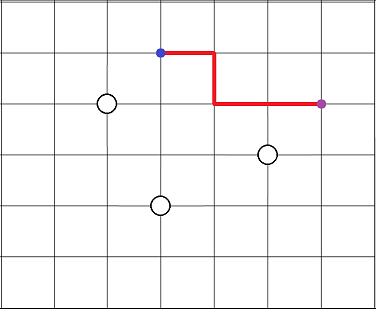 Every street intersects every avenue. Every intersection can be described by pair (x, y), where x is avenue ID and y is street ID.

There are N fountains in the city, situated at intersections (X_i, Y_i). Unlike normal intersections, there's a circle with radius 10 meters centered at the intersection, and there are no road parts inside this circle.

The picture below shows an example of how a part of the city with roads and fountains may look like.

City governors don't like encountering more than one fountain while moving along the same road. Therefore, every street contains at most one fountain on it, as well as every avenue.

Citizens can move along streets, avenues and fountain perimeters. What is the shortest distance one needs to cover in order to get from intersection (x_1, y_1) to intersection (x_2, y_2)?

Print the shortest possible distance one needs to cover in order to get from intersection (x_1, y_1) to intersection (x_2, y_2), in meters. Your answer will be considered correct if its absolute or relative error doesn't exceed 10^{-11}.

One possible shortest path is shown on the picture below. The path starts at the blue point, finishes at the purple point and follows along the red line.