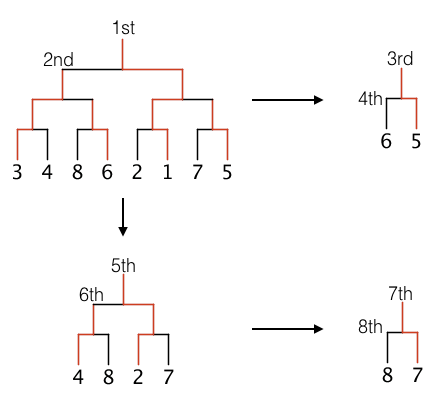 2^N players competed in a tournament. Each player has a unique ID number from 1 through 2^N. When two players play a match, the player with the smaller ID always wins.

This tournament was a little special, in which losers are not eliminated to fully rank all the players.

Takahashi has a sheet of paper with the list of the players sorted by the final ranking in the tournament, but some of it blurred and became unreadable. You are given the information on the sheet as a sequence A of length N. When A_i is 1 or greater, it means that the i-th ranked player had the ID A_i. If A_i is 0, it means that the ID of the i-th ranked player is lost.

Determine whether there exists a valid order in the first phase of the tournament which is consistent with the sheet. If it exists, provide one such order.

If there exists a valid order in the first phase of the tournament, print YES first, then in the subsequent line, print the IDs of the players sorted by the final ranking, with spaces in between. If there is no such order, print NO instead.

This is the same order as the one in the statement.