We number each face of the cube in the following way, just as a dice, and we denote each face by Surface 1 and so on. 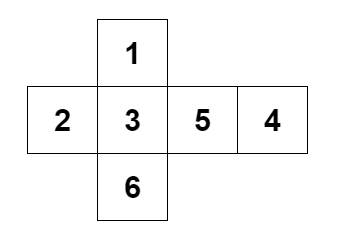 Therefore, we can solve the original problem if we can find, for each of 24 rotations, “the number of combinations of integers to write which are invariant by the rotation.”

For example, let us consider rotating it by the axis through the centers of Surface 1 and 6 by 90 degrees clockwise. In order to be invariant by the rotation, Surface 2, 3, 4 and 5 should have the same numbers. The number of such combinations is equal the number of tuples of positive integers \((x, y, z)\) where \(x + y + 4z = S\), where \(x, y,\) and \(z\) corresponds to the numbers written on Surface 1, 6, and 2, respectively (Note that we don’t care if \(x, y,\) and \(z\) are distinct or not). This number can be found with a digit DP or fast matrix exponentiation. (described later)
Same facts apply for the other rotations.

Therefore, we’ve seen that we can count the number of combinations that are invariant by a rotation, so the problem has been solved by Pólya enumeration theorem.

First, let us consider how many ways are there to write numbers in surface, once the 6 numbers to write has been determined. This can be found by first enumerating all the permutations of these numbers assigned to each face, and then removing those which coincide after a rotation of the cube.

Assuming \(x_0=0\) for convenience, and with variable transformations \(y_i=x_i-x_{i-1}\), the number of such combinations is equal to the number of tuples of positive integers \((y_1,y_3,y_6)\) such that \(6y_1 +4y_3+y_6=S\). The number of such solutions can be found with a digit DP or fast matrix exponentiation. (desribed later)
Same facts apply for the other cases.

Since we found the number of tuples for each type, the original problem has been solved by multiplying each of them by the number of ways to write on the cube.

This solution is by evima.

For instance, let us consider finding the number of combinations of positive integers that satisfies \(x+y+4z=S\) (it can be found for other cases similarly). With \(x,y,\) and \(z\) subtracted by \(1\), and substituting \(S-6\) with \(S\), it can be boiled into the problem “find the number of combinations of non-negative integers that satisfies \(x+y+4z=S\).” We consider this.

Let us consider the following DP: